MicroVentures A development blog for our mobile adventure game

It’s been a good week for MicroVentures! We’ve just completed the first week of our second sprint and we are moving right along.

Like last sprint, we decided to bite off a big chunk of work to compete. Thankfully, this time we took some advice from our parents and cut up the work into small bite-sized pieces before chowing down! Our tasks this sprint have been much more thought out and we can complete most of them within a couple hours. This means we have no excuse for not completing a bunch of tasks each day! Damn….

We’ve completed a bunch of back-end components like the camera and sound system  and the level generator is working better than ever! I’ve been mostly working on getting the story generation framework done so we can integrate it with the level generator. It’s pretty much going to be amazing.

Speaking of amazing, check this screenshot of our game:

Ok, maybe it doesn’t look that amazing, but it is pretty amazing! This is a zoomed in look at what you saw in previous posts and how the game will look. Well, the game will have pretty sprites and buttons and such, but you get the idea. I hope…

Not only have we been making the game more awesome, we’ve also been making the team more awesome! We spent Friday afternoon playing around at the Boardwalk arcade before our dinner at Woodstock’s. Since we had been getting along so well, we decided to introduce some competition! After a round of minigolf (in which we realized we aren’t great at minigolf) we headed to the arcade proper to play some classic games. 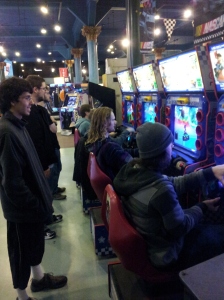 A good time and a nice break from coding. Speaking of, I should probably get back to work…

This entry was posted on February 11, 2012 by Zak. It was filed under Uncategorized .

MicroNews from the team