MicroVentures A development blog for our mobile adventure game

Let’s see, coming into this week we were almost eighty hours off our burndown chart. Not exactly something you want to tell Jim at the end of the Sprint. On top of that since our whole group was in Game AI, we all had Pacman due Thursday. The plan was to finish Pacman Wednesday night and reserve Thursday’s all nighter for Microventures. That was the plan anyway.

Tuesday was our presentation day for Microventures at the Business Design Competition. We had a good reception so hopefully we’ll get some interesting prospects to work with. At this point though we’re a little doubtful someone will come in and match their business with our programming. We’ll have to wait until next week though.

Wednesday night comes around and the “good kids” are all pretty much done. The other half of us are kind of lagging behind. Thursday night comes and we’re still working on Pacman. Oh well. That’s why we are having an all nighter right? Chris and I finished Pacman a couple hours before midnight.

The all nighter was another success. We actually have a procedurally  generated level with spawned monsters and chests. We can even move our player around. There was a lot of debate over pathfinding. At first we wanted to make a placeholder pathfinding for this Sprint, but realized we shouldn’t attempt pathfinding at all if we’re going to replace it later with A*. So in the end the player can only move to adjacent squares.

So the Sprint has come and gone. We’re still fifty hours off our goal, but considering what we have, I am quite satisfied myself. I promised you last week for a playable game right? And did it happen? Yes it did. Well it’s interactive anyway. The true success here is not the project, but the team itself. 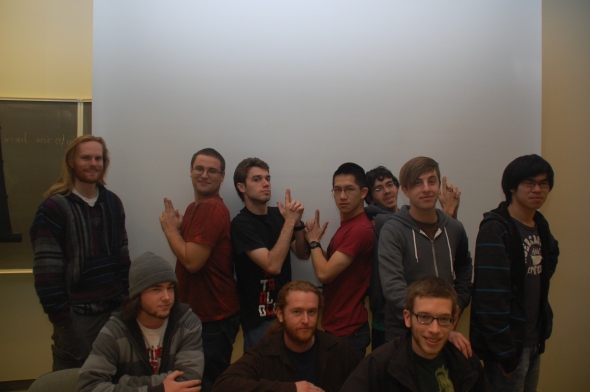 Yeah, that’s the team right there. These are the guys I wish I met three years ago, back when I had little faith that computer science geeks just weren’t my type. Funny thing is I’ve known Chris since middle school, Dan for three years, worked with Kyle last year, and apparently met James and Fletcher back in CS80K. Fletcher actually knocked Reflector (my 80K game) from placing in the finals. James made this hilarious Metal Gear esque game that I still remember giving me smiles until this day. I guess it just goes to show, you don’t really know who you’re going to get along with until you actually give it a good shot.

Then again it’s not fair to say I would just get along with any other 170 group. Fact is I was on Hello World for a short couple of days before I realized the team just wasn’t for me. Being on a team of highly skilled programmers can be intimidating and disheartening. And with different personalities it probably would have led me down the same hole I’ve always fallen into. Yes, their game is looking great these days, but I’ve never looked back since I switched to Microventures. As much as finding a project you believe in is important, it’s equally important that you find a team that you’re willing to fight for. It’s like war right?

It’s funny that half the year is still here, yet I’m already growing sad thinking about what I’ll be leaving behind. The team, the lab, just the environment is superb here. I really wish college life had started here. It’s so motivating to be working right along side your peers. My middle school teacher told me I’d make my true friends in college, because being friends with people who share the same goals is just powerful. He was very passionate about his work, so maybe “true friends” is a little much, but surely some of the best friends you’ll make is probably right.

Not sure what else to say about the team. Just a real fun bunch with each our own quirky, but similar personalities. Think I’ll dedicate a part of each blog to a different team member. I’ll call it “Meet the Team.” Yeah, that sounds like a plan.

– Clement “I Do Real Talk” Tran

This entry was posted on February 7, 2012 by microventuresgame. It was filed under Uncategorized .

MicroNews from the team